More than 35 percent of all motorvehicle accidents occur at intersections, according to the National HighwayTraffic Safety Administration (NHTSA). In fact, the NHTSA reports that: 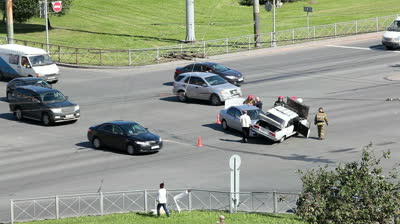 Some of other prominent examples of human error that commonly contribute to intersection car accidents include false assumptions of other drivers’ actions, obstructed views of an intersection or oncoming traffic, illegal maneuvers and driver distraction caused by objects within the vehicle.While male drivers of any age are the most likely to make illegal maneuvers that cause intersection car accidents, drivers of either gender who are older than 55 years old are most likely to misjudge other drivers’ actions and/or the timing of making certain maneuvers (like left-hand turns) at intersections.

Drivers who are 24 years old and younger are most commonly involved in intersection car accidents that also involve distracted driving (with the use of cell phones while driving being a specific problem) and/or aggressive driving.When negligence and/or human errorplays a role in causing intersection car accidents – even if the role is small,accident victims can be compensated for their medical bills, lost wages,property damage and other losses by pursing a car accident lawsuit.

Oops, you forgot something.

The words you entered did not match the given text. Please try again.